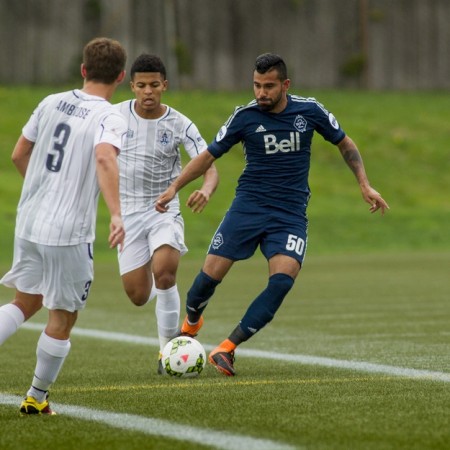 The Austin Aztex (10-15-3) completed their inaugural USL campaign with a dramatic 3-2 victory over Vancouver Whitecaps FC 2 (8-14-6) at Thunderbird Stadium in Vancouver. The win elevated the Texas club to a 9th place finish, in a parity-filled USL Western Conference. While outside of a playoff position, the Aztex completed the season on a strong note, winning their only game north of the border.

Sunday’s match did not get off to a favorable start for the visitors as Vancouver mounted an impressive attack. Whitecaps 2 had several good scoring chances denied in the first half. The first came early in the match when Victor Blasco broke free and found the net, but was ruled offside.

Roughly 20 minutes later the duo of Tyler Rosenlund and Caleb Clarke drew Aztex keeper Codi Laurendi off his line leaving an open net. Fortunately for the Aztex, Sergio Campbell was there to head it off the line. Just minutes later Laurendi was forced to make a diving save that saw the teams head to intermission knotted at zero.

The second half started in a similar fashion to the first 45 minutes with Vancouver pressing on the offensive attack. This time the Whitecaps were rewarded for their efforts as Brett Levis was sitting on brace by the 58th minute, leaving the Aztex down 2-0 with little to play for.

Paul Dalglish’s squad was able to show some tremendous fight as they refused to give in and pressed for a result of their own. Romain Gall led the charge when he beat the keeper on a near post strike in the 66th minute and almost found the net again in the 73rd.

Just minutes later, a determined Tony Rocha stole the ball deep in the offensive half and fed Sainey Touray, whose shot rebounded off the keeper and back to Rocha, who calmly lobbed the ball into the upper corner and equalized the match in the 80th minute.

With the Whitecaps returning to an attacking position, the Aztex were able mount a counter down the left side of the pitch when Mozzi Gyorio sent a perfectly weighted one touch cross that found an unmarked Kris Tyrpak. The former MLS player and Dripping Springs product headed the ball past the keeper, giving Austin a victorious end to a tumultuous expansion year in USL.

Two days earlier the Aztex were less fortunate when they played a Seattle Sounders 2 team that was fighting for the final playoff position in the West. After conceding a penalty in the opening minutes, the Aztex battled to take a 2-1 lead in the first half. Ultimately the Sounders were too strong and posted a 3-2 victory, and in the process punched their ticket to what should be an exciting round of playoffs.

With the season over, the Aztex have fallen short of their stated goal of making the playoffs in their first professional season. Many questions and concerns loom over the club as it prepares for 2016 on and off the pitch. The front office has made no official announcements regarding next season, leaving supporters, players, and coaches hopeful there will be a next season of Aztex soccer.