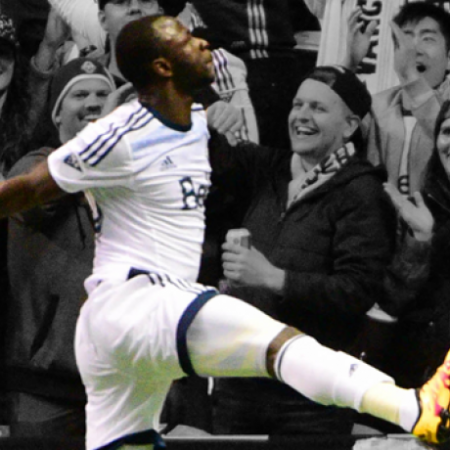 Austin soccer fans who followed the 2012 Aztex saw first-hand what a talented player Kekuta Manneh was, and how he grew under coach and father-figure Paul Dalglish. The following year saw him drafted by MLS’ Vancouver Whitecaps, where his growth has continued without slowing. The past few weeks have seen the young goal-scorer in headlines across the Internet; here are a few highlights of what the former Aztex striker is up to.

The Vancouver Whitecaps winger played a role in both of his team’s wins last week, assisting Blas Perez’s eye-popping bicycle-kick winner midweek against Chicago, before taking the spotlight himself, scoring two and assisting on another in Vancouver’s 4-3 win at Toronto FC, in the most entertaining game of the season to date.

Didier Drogba, David Villa, and Sebastian Giovinco all found the back of the net, but none shone brighter than Vancouver Whitecaps FC youngster Kekuta Manneh. The 21-year-old was named MLS Player of the Week today after contributing towards five of Vancouver’s six goals in wins over Chicago Fire and Toronto FC.

Earlier this month, he got a new pair of shinpads with the name of his mom, Mariama, displayed on them. She passed away back in their native Gambia when Manneh was just 10 years old.

Speaking to MLSSoccer.com, Manneh revealed that he is now eligible to apply for a U.S. passport. Once approved, Manneh would be eligible to represent the U.S. internationally following a process that has been several years in the making.

…“It would mean a lot. My family, they live in Texas, and they’ve been very proud and very supportive of me throughout my career. Since I’ve lived with them, I remember the first time I asked mom to buy cleats and she said ‘Let’s go to the store and buy cleats’. They’ve been supporting me throughout my career and it would mean a lot to represent the country that they were from and I’d be very proud to do that.”

Congratulations on the continuing accolades, and keep up the good work, Kekuta. You have a lot of fans here in Texas watching and rooting for you!