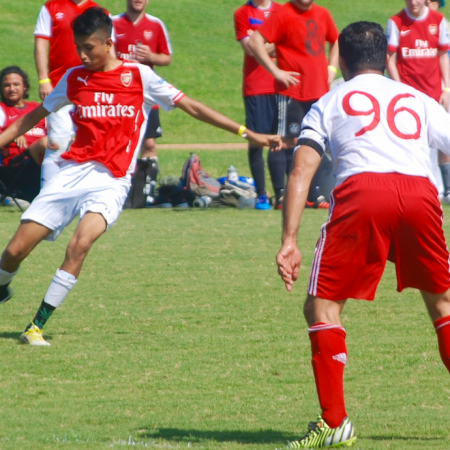 It is a challenge to recap who did what. The Austin Gooner side had multiple players with the names of Ozil and Ramsey on the back of their jerseys. On the other side, many of the LFC Austin players wore Austin Reds t-shirts with the number 96 on the back … At the interval, Austin Gooners were up 3 – 2 … And the final minutes were filled with drama. From a corner kick, an Austin Ozil in un-Ozil like fashion won the header and turned the ball on goal. =It hit the crossbar and fell to Austin Gooner Miles who knocked it in for his first ever match goal. LFC Austin pushed forward from the kickoff attacking the Gooner goal. And from hero to villain, Miles was called for a handball just outside the box. An Austin Red 96 stepped up to the free kick and with the last kick of the game punched the old onion bag. The game finished 5 – 3 with the Austin Gooners taking home the Austin Charity Shield trophy.

The two sides met up at Black Sheep Lodge to share a pint and watch the Champions League Final together. The event raised $1,700 for the Aztex Soccer Foundation.