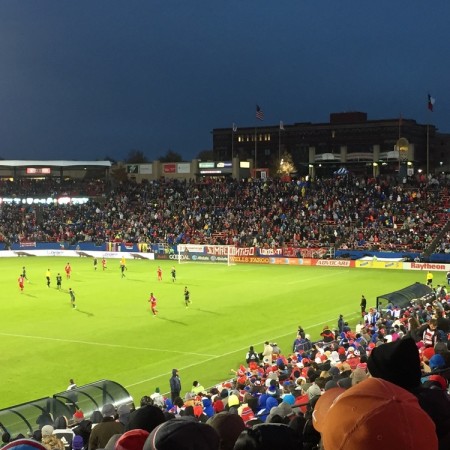 Sunday night Chris G. road-tripped to Frisco to watch FC Dallas host Portland Timbers FC in the second leg of the MLS Western Conference championship. His Dallas team came in to the game down two goals from the first leg, but with one road goal that might have made the difference… but didn’t. The game ended in a 2-2 draw, leaving Portland to win the series on aggregate, 5-3.

I’m not here to give a match report, I just thought I’d share a few words and photos from the experience. Even apart from the result, it wasn’t the best game I’ve ever been to, I have to say. There was some good play, and some big excitement for the twenty or so minutes that it looked like the Texas team might actually push it to extra time, at least. But was it worth being stuck in lines of one kind or another for nine-plus hours? Maybe if Dallas had made that comeback, it would have been.

Traffic – Between it being the final day of the Thanksgiving holiday weekend, and also cold and rainy, traffic was about as bad as it can get on I-35. I say “about”, because at least I wasn’t stuck in the 5-mile-long traffic jam near Waxahachie that I saw on the southbound side when I was driving to the game. That was one of six separate serious accidents that I passed during the course of the day, there and back. I don’t have pictures from the road, because I didn’t want to make it seven.

Lateness – In my plan, I had a full hour of buffer time for my trip. I somehow blew half of that just by leaving late, and then more than blew the rest going school-zone speeds through various parts of I-35. By the time I was getting to the north end of the ol’ Dallas North Tollway, it was pushing 4:15. Kickoff was supposed to be 4:00, and I was glad it was running late. Maybe I wouldn’t miss much after all! Ha ha ha ha. Yeah.

Parking – I wound through every lot on the north and west sides of the stadium: all full. I ended up parked in a strip-mall lot where I hoped I wouldn’t be towed, which Google Maps confirms is a full mile from Toyota Stadium. That hope of “not missing much” was fading fast. I piled on the layers, gloves, and hat, and hoofed it over to the stadium.

Weather – The cold and wet were the things I’d been dreading the most all week, and ironically it turned out that neither really bothered me. I had four layers of shirts (two FCD branded) and a long, heavy winter coat from my younger days in frigid Ohio. Add gloves and a knit hat (also FCD, the only fan gear visible), and I wasn’t really cold all night. It wouldn’t start raining until after halftime, and even then, not that hard. I threw my hood on, and I was actually not uncomfortable.

Back to me hustling to the stadium, hoping their janky FlashSeats ticket app will work okay on my phone, and as I got closer, I see… no. No. That can’t be the line to get in. But it was.

Security Lines from Hell – By the time I got in line, the MLS app says the game is in the fourteenth minute (and still 0-0, thank god). But this line is HUGE. Like this:

And it is crawling. A lot of people around me just gave up, and left. To be honest, if it hadn’t been a four hour drive home, I might have, too. Apparently the league mandated extra security, apparently following the Paris attacks. I won’t rant too much more about it, it was obviously a super crappy situation. (It was bad at the New York-Columbus game in New Jersey, too.)

Beer, or lack thereof – By the time I finally got in, it was about the 40th minute. Rushing to my section, I stopped at a bar stand to buy a beer, and found out why there was no line: no beer. Their kegs were empty, and they weren’t sure they’d get more there. I’m thinking, Boy, this organization is really killing it the fan experience right now.

I got to my seat, and caught the last few minutes of a goalless first half. During halftime, I half-heartedly tried to buy a beer at a couple more stands. They did seem to have it there, which was a start. But after standing in a non-moving line for five-plus minutes, with the reward being an $8 bottle of Budweiser, I just said forget it.

Young Love – In one line I was behind a young couple, the female half of which I heard say that this was their first date. Ouch. I’m thinking they will either have a good story for their kids and grandkids, or they will never, ever speak again.

A Good Game Breaks Out – Back for a second half, where there was finally some action. First, bad action (a Timbers goal), then good action (two Dallas goals); at least it was getting exciting. And I will say this: that crowd was the best one I’ve ever seen at Toyota Stadium. The people who were there wanted to be there. They’d seen the weather forecast, and it hadn’t stopped them. They’d seen the security lines, and it hadn’t stopped them. They saw the Timbers get a road goal, and they felt it start to rain, and those things didn’t stop them, either. Everyone around me was up and standing the whole time, and it was great.

Then our team lost (well, tied, but you know). That was less great. That last Portland goal – which was #2 on ESPN SportsCenter today, by the way – I’m equal parts glad to have seen it in person, and so utterly disgusted that I could punch a kitten. A bearded, hipster kitten that thinks chainsaws at soccer games are the best thing ever.

Then re-play the trip in reverse: a mile back to the car, traffic out of Frisco, a drive down I-35. At least it was less congested: no security line to get out, of course, and fewer traffic jams on the drive home.

So that’s it for FC Dallas this season. So, so close. If they can keep the chemistry in 2016 that they had started to put together this year, next season could be another good one. Until then, my next road trips will be to see the US Women – first in San Antonio next week, and then, I hope, in Frisco again for Olympic qualifying in February. I’ll take my winter gear again, and this time, I’ll leave a lot earlier.

Update: I got an email from FC Dallas this evening, as I wrote this. They said their “ticket scan records” indicated that I was “affected adversely by the security measures that were taken at Toyota Stadium last night”. It was a nice apology, and appreciated. They’ve also offered to make it right: either a 50% off coupon for up to 8 single-match tickets, or replacement tickets to one of FCD’s CONCACAF Champions League games in August or September next year. Well done, FC Dallas.