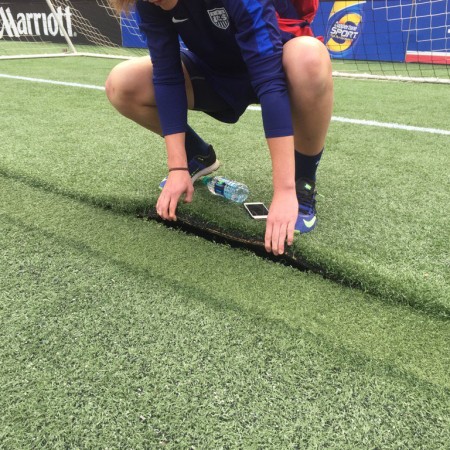 U.S. Soccer announced this morning the last-minute cancellation of the friendly the Women’s National Team was to play against Trinidad & Tobago in Hawaii. The decision was made “after a determination that the artificial turf surface is not suitable to hold an international soccer match”.

The U.S. Women are scheduled to play Trinidad & Tobago at the Alamodome in San Antonio on Thursday night. The women’s soccer news site Equalizer Soccer, in a post from just before to the cancellation announcement, points out the checkered history of that field:

And next up for the U.S. after Hawaii? The Alamodome in San Antonio, an infamous indoor turf on which Australia’s Kyah Simon tore her ACL in October 2013 while playing the U.S. The Alamodome turf is also where Morgan initially injured her ankle, an ailment which developed into a stress reaction and kept her out almost seven months, into June 2014.

Morgan was quoted in that same piece, pointing out that eight of the ten “Victory Tour” games played by the World Cup winners have been on artificial turf, while the men’s national team have played all of their games on natural grass during the same period. Clearly U.S. Soccer has been going for larger venues, where the team can play in front of more fans (and sell more tickets, of course). The irony of the situation, after the controversy about the World Cup itself being played on fake grass, can’t be missed.

It puts fans in an awkward position as well. Both of us here at Violet Crown Soccer have tickets for the match Thursday night, and we want to see the best women’s national team in the world in action. But we obviously don’t want any of them to be put at undue risk of injury, either.

Update, 12/7: The players have issued a statement on The Players’ Tribune about the cancellation. While not directly addressing Thursday’s game, it emphasizes that an artificial surface per se wasn’t the problem:

It wasn’t until we got to Aloha Stadium the next day — the day before the match against Trinidad and Tobago — that we finally saw, for the first time, how bad the stadium’s field truly was. The conditions were such that our coach shortened practice to a brief 30-minute training session so we wouldn’t risk injury before the game. There were sharp rocks ingrained all over the field. They were everywhere. The artificial turf was actually pulling up out of the ground, and the turf itself was both low-grade and aging. This was a playing surface that looked like it hadn’t been replaced in years.

There is a larger, more vital conversation about turf — as it concerns women’s soccer — that continues to make progress. But turf is our reality right now; we play on it all the time. This decision wasn’t about “turf vs. grass.” This was about field conditions and player safety.