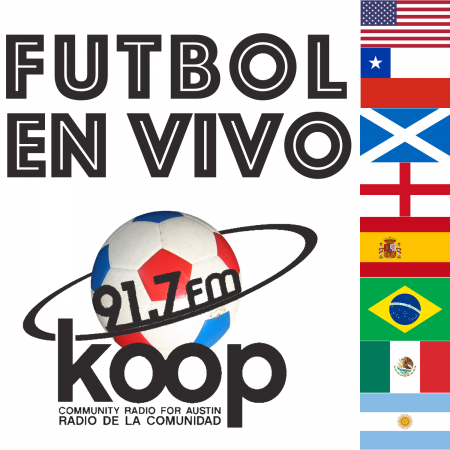 Futbol En Vivo was a bilingual radio program that aired every Tuesday from 1-2pm on 91.7 FM KOOP Radio in Austin, Texas. Work and family commitments of the hosts recently prompted them to halt the weekly show after nearly seven years on the air.

The program started in mid-2009 with Chilean David Alvarez and Mexican Jose de Loera as hosts. De Loera, current proprietor of Takoba, was unable to continue as host due to his Takoba obligations, so Alvarez, after several months, was introduced to local soccer writer Arch Bell, who eventually became co-host and took over as lead programmer in 2010 once Alvarez began a new job. In was in that time that both American Kit McConnico and Argentine Claudio Ostrovich became contributors and co-hosts, with Mexican Jorge Iturralde also becoming a regular member of the program in 2012 until the show’s conclusion in January 2016.

Futbol En Vivo was fortunate to have many great guests over the years:

I am likely leaving out a few others who immediately do not come to mind, but certainly special thanks to co-hosts David Alvarez, Kit McConnico, Claudio Ostrovich and Jorge Iturralde for all their dedication and collaboration over the last six-and-a-half years.

Thanks to Arch Bell for this guest post. See the archives of Futbol en Vivo.

Have anything you’d like to publish on Violet Crown Soccer Network? Let us know.