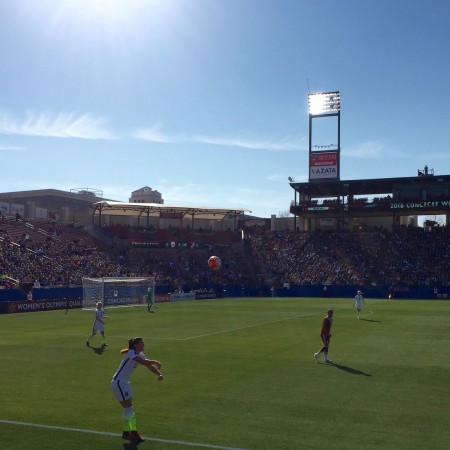 On Saturday Chris G. road-tripped to Frisco to watch the U.S. Women’s National Team play Mexico in the second of three group games in the 2016 CONCACAF Women’s Olympic Qualifying Championship.

The last time I made the trip up I-35 to Dallas for a soccer game was the FC Dallas – Portland Timbers playoff game last November, and my experience this weekend could hardly have been more different. In November I was late, in terrible weather, and stuck in ridiculous lines – both on the road, and waiting to enter the stadium. This weekend I was early enough to get in to the stadium with no delays, and the weather was nicer than an early February day in north Texas has any right to be. Best of all, this time out my team won.

In addition to the usual U.S.-Mexico rivalry, this El Tri team was expected to be the toughest opponent the World Cup winners would face in their qualifying group. The narrow 1-0 U.S. win – much closer than the 6-0 thumping we saw them give Trinidad & Tobago in San Antonio in December – bore that out. Mexico played a strong, stingy defense that kept the game level late into the game. The U.S. finally drew a questionable penalty in the 79th minute – though even that goal had to be made off the rebound – and ended the day with all three points, clinching the U.S.’s place in the tournament semifinal.

At least it was a closer scoreline than the first match of the day had been: a Costa Rica – Puerto Rico game that ended with a brutal 9-0 win for Las Ticas.

On Monday the U.S. should roll over Puerto Rico (we already beat Costa Rica by five, so by the transitive property the Americans should win by approximately fourteen) before heading to the all-important semifinal in Houston on Friday. The two teams that come out of that day’s matches both go to the Olympics, making next Sunday’s tournament “final” a little anticlimactic.

Here are a few images from a good game on a beautiful day.