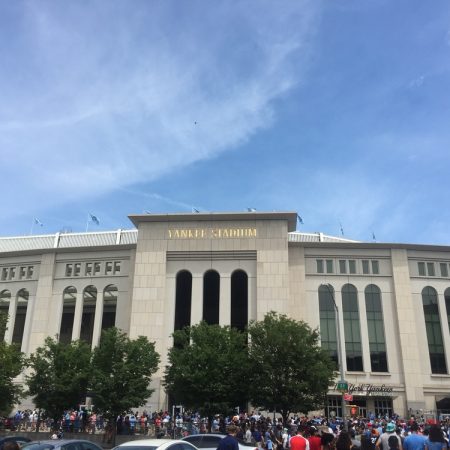 Last week Chris G. visited New York City with his family, and managed to squeeze a soccer game in, in between visiting museums and monuments.

Taking the better part of a day out of our NYC sightseeing trip to travel to the Bronx for an MLS game was partly due to my own soccer fandom, sure. But it was also due to my wife’s growing interest in the sport, especially as played by the handsome megastars who happen to be on her favorite teams. So it was that we found ourselves, her in a light blue #7 “Villa” NYCFC shirt and me in a non-partisan retro World Cup tee, plus our two accommodating kids, frantically trying to figure out how the D train’s altered weekend service would work going through the A train station at 34th Street & 8th Avenue. It turned out we were in the right station but on the wrong platform; we eventually figured out the connection through Columbus Circle, followed an increasing number of people in sky blue gear (plus a few Red Bulls supporters in red and white), and finally emerged at 161st St.: Yankee Stadium.

We were there to see the latest edition of a new derby in an old city, a cross-town contest that NYCFC had lost every single time so far, home and away. My wife, a true fan despite her recent allegiance, was sure Pirlo and Villa would lead her team to victory. I was supportive but less certain. We both remembered the recent 7-0 smackdown that the Red Bulls had given the home team, just six weeks prior.

The weather was great, though even on a mild day a noon kickoff was on the hot and bright side. The crowd of 33,613 was fantastic, full of excitement and behind their team throughout. We weren’t far from the supporters’ section, and they were in full voice for the full ninety. In the end my wife’s faith must have made the difference, as the home team finally managed to vanquish their more established foes, 2-0.

The majority of our MLS experience has been at FC Dallas games in Frisco, but this game was unlike most of those (with the possible exception of last year’s Western Conference final). For one, though their baseball stadium wasn’t full, the crowd was more than twice what FCD’s “sellout” 4th of July game had the following day. Part of the difference was the setting: Yankee Stadium, even this newer one, is a legendary, awe-inspiring place. But another difference, one I would never have appreciated without experiencing it, was the communal feeling of traveling to the stadium with fellow fans en masse. It’s the same transportation issue as a traffic jam on the Dallas North Tollway: a lot of people trying to go to the same place at the same time. But instead of exhausting and rage-inducing, it’s fun and energizing.

More than once since Sunday’s game, my wife has said to me, “Wouldn’t it be great if we had a big team like that, right here? One where we could have season tickets and go to all the games and see stars like that all the time?!” I bite my tongue about the scores of Aztex games I’ve gone to, about how we did have that. Kind of. She tagged along to a game or two each season, but she was never as pumped as she was about this event. I’ve often wondered exactly how Austin could support an MLS team, when the last two lower-league attempts haven’t made it. But now I’ve seen the difference more clearly than ever. Personally, I’ll go see pretty much any team that plays here (see you at the FC Austin Elite game on Saturday! And Sunday!), but some people won’t feel like it’s a big deal unless it is a big deal.

Here’s hoping we’ll have the chance to see you on the train to the game someday.