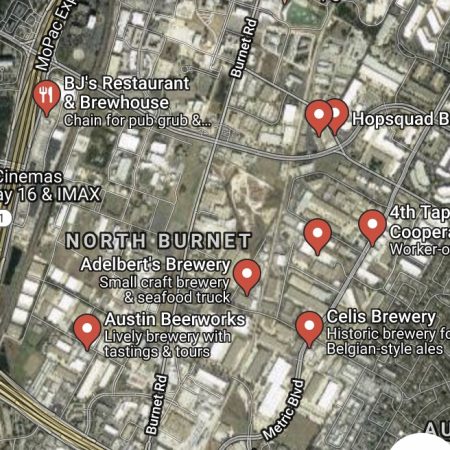 One of my favorite sayings is “the perfect is the enemy of the good.”

I usually apply it to politics, when I’m annoyed at those who demand ideological purity and refuse to consider a candidate who is actually electable.

I think it may apply to our Major League Soccer stadium search, as well.

On Tuesday, City of Austin staff released a map of public properties that might be used for the Columbus Crew if the team relocates here, including five possible stadium sites.

A couple caught soccer fans completely by surprise, and one in particular really grabbed my eye: 10414 McKalla Place, in north Austin. I’d like to present the argument in favor of it.

This will not be a vociferous endorsement. That may sound strange, but let’s face it: we know what the perfect site is. It’s Butler Shores. You’ve seen the rendering of the proposed stadium for that site. It’s beautiful – both the stadium itself and the skyline views it would offer to television and spectators.

But supporters of Butler Shores had better gear up for a vicious political fight.

I disagree with many of Butler’s opponents, both philosophically and factually. But I’m not going into that here. The important point for this blog post is that soccer fans need to know that, whether they are right or wrong, the opponents’ beliefs are very sincerely and fiercely held, and neighborhood/green space protection activists are a powerful voting bloc in this city. I know this from 31 years of living here, including a decade and a half as a local politics reporter for The Austin Chronicle.

Regardless of how Precourt Sports Ventures tries to make Butler happen – whether via a City Council decision or a public vote – it will have to win over, not roll over, those citizens. PSV damn sure won’t be able to just buy an election – look what happened to Uber and Lyft. Those companies came in full of arrogance and got slapped down at the polls (they finally got what they wanted, but only via the sleazy path of getting the Texas Legislature to overrule Austin voters).

So let me speak up for McKalla Place. No, it’s not perfect. But it’s good. Here’s why:

This is the big one. First off, it’s not on parkland. That’s huge. Secondly, look at the tract on a satellite map – there are no neighborhoods immediately adjacent. It’s surrounded by a warehouse district. Yes, that’s also a knock against it (I’ll address that next), but for political purposes, it’s a bargain. Yes, I’m sure someone from the neighborhood will complain – this is Austin, after all – but with a buffer of nearly a mile between the stadium and houses, any opposition will be marginal at best.

They’re small so far, but quality. Soccer fans like their beer, and this tract is right smack in the middle of what I affectionately call the “Brewery Ghetto.” There are no less than six breweries within walking distance of McKalla, and a seventh nearby. (See the red pinpoints here.) And of course, the Domain is very close by. Love it or hate it, the Domain is emerging as a serious entertainment destination. Put the stadium here, and I’m willing to bet the warehouses fade away and the entire region transforms into an entertainment district. Yes, there is a valid argument that the area is not “walkable,” but that’s fixable.

No, not according to the city’s map, but frankly, I take issue with the city’s definition. The geographic population center of the Austin Metropolitan Statistical Area is at Burnet and North Loop, just five miles south of McKalla – or, put another way, a quick ride down the road on the 803 MetroRapid Bus. In any case, it’s barely outside the city’s defined area. I’ve seen some predictable complaints that it’s “too far north.” Frankly… whatever. We aren’t talking about the FC Dallas fiasco in Frisco. McKalla is well within the Austin city limits, not Georgetown or San Marcos. People who really want to see pro soccer will get there. And speaking of mass transit…

Kramer Station is only a block north. Build the stadium at McKalla, and you could relocate Kramer Station to the front gate. Five Capital Metro routes service the tract (including the heavily used 3 and 803). The most important route in the city, the 1, also comes reasonably close.

5. It also has room for parking.

Yes, the hardcore urbanist crowd views autos and mass transit as almost mutually exclusive. And I believe the neighborhood activists’ fears of traffic overrunning the Butler area are overblown. But I think what the majority of potential MLS fans want is to just get to the game in the way that suits them best. Personally, I’ll take the 803 from my Crestview neighborhood. But let’s also provide reasonable accommodations for folks coming in from Round Rock, Leander, and Buda. This team’s fan base will not be exclusively condo-dwelling downtowners.

No, McKalla won’t have those amazing downtown views. And even more importantly, it’s not the stated preference of Precourt. But it might be what’s doable. I’m assuming Anthony Precourt is going to read this, so let’s invite him: Mr. Precourt, make a visit to the McKalla tract. It won’t look very impressive. But try to see its potential, not just its present.

Perhaps I’m aiming too low. Austin aspires to be a world-class city, and a stadium on Lady Bird Lake would be a world-class jewel. But soccer fans, you need to understand – there are a lot of Austinites who don’t give a crap about our MLS dreams, and if you think you’re going to persuade them, you’re kidding yourselves. You’re probably also kidding yourself if you think you’re going to outvote them.

If you (I’m also talking to you, Mr. Precourt) have the steel for this fight, then have at it. But I truly believe it can be avoided… and we can still have the pro soccer experience that other great American cities currently enjoy.