Though it has now become the center of many Austin soccer fans’ universe, none of us had ever heard of “McKalla Place” just a few years ago. We’re proud to have published the pragmatic and insightful post by Lee Nichols that introduced many to that name: My Stadium Pick: McKalla Place.

I’m assuming Anthony Precourt is going to read this, so let’s invite him: Mr. Precourt, make a visit to the McKalla tract. It won’t look very impressive. But try to see its potential, not just its present.

Fast-forward a few years, and suddenly there’s this thing out there, making that tract look a lot more impressive: 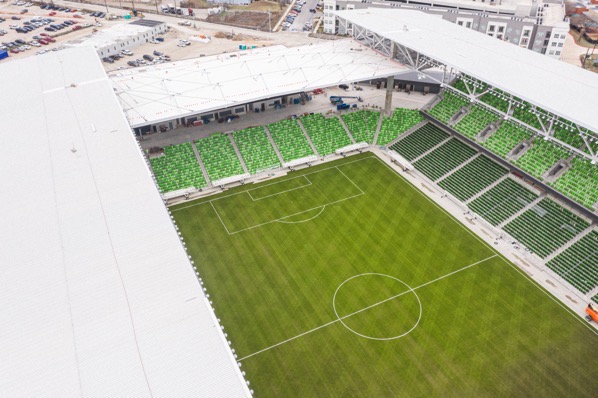 We all knew it wouldn’t be called “Austin FC stadium” forever, that there’d be a sponsor someday. Sure enough, we got the announcement in January: it’s now officially Q2 Stadium.

Which is fine. We’d never heard of Q2 before – probably why they’re paying to put their name on a stadium – but the little we know seems: fine. Those of us in the corporate world might be a little thrown off by a term that also means the second financial quarter of the year, but at least it’s easy to pronounce (looking at you, MAH-fray Stadium), and even easier to spell. The fact that “Q” can also refer to “a disproven and discredited American far-right conspiracy theory commonly called a cult” makes saying something like, “see you at The Q!” less great, but here’s hoping that particular meaning of the 17th letter of the alphabet fades quickly. (Betcha the marketing department at Q2 corporate headquarters hopes so, too.)

To be clear: we’re not against stadium sponsorship generally, or against this sponsorship in particular. Both are good. It’s part of pro sports, and we hope the huge piles of money it brings in are spent wisely on the stadium and our team.

Plus, it’s key to one of our favorite La Murga songs: