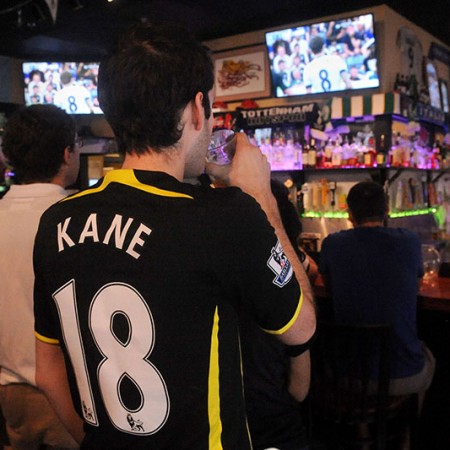 If you’ve spent much time at Aztex games, Scorpions matches, or the Austin Soccer Fan Zone on Facebook, you’ve probably run across Lee Nichols. He has an article in this week’s Austin Chronicle, Game Changer – A new football culture for Austin bars.

The season kicking off is soccer – the very first match of the 38-game English Premier League schedule that will last until May. This opening battle pits Manchester United (a team even the soccer-ignorant have heard of) against Tottenham Hotspur, aka “Spurs.” (It’s even the wrong kind of Spurs for Texas.)

The bar is Mister Tramps on Research Boulevard, which since 2012 has been the home base for Austin Spurs, the team’s local fan club – or “supporters’ club,” in English soccer parlance. You may have never heard of this team or even know where Tottenham is (it’s a neighborhood in north London), but they do indeed have local fans.

Quite a few, actually. This morning, at least 50 have turned out, and that’s just the ones willing to drag themselves out of bed and get to a bar for a 6:45am kickoff. Across town at Fadó, the Austin Reds (Manchester United) are watching the same game and singing their own songs. Later that morning, Everton and Chelsea fans would gather at Haymaker; on Sunday, Arsenal supporters would eat breakfast at the Tavern, and Liverpool lovers would meet at Fadó (if it had been a Saturday they’d have been at Bull McCabe’s); and at 2pm the day after that, Manchester City loyalists would populate Haymaker again for some “Monday night football.”

In a nation that has long been notorious for its ambivalence or downright hostility toward the world’s most popular sport, things have changed.

It’s a good story on fans of the European leagues, especially the EPL. Read it all. If you’re looking for where to find your team’s Austin fans online, see our Supporters’ Groups directory.