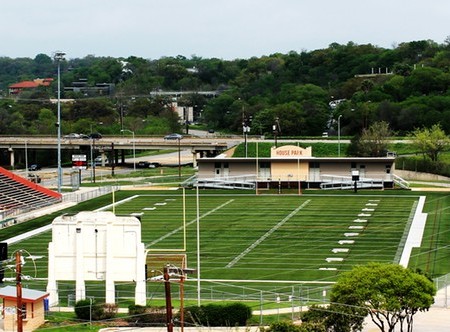 On October 2nd the Austin Aztex announced that they will not be participating on the field in 2016, with the intention to return in 2017. The press release made clear that the Aztex are under pressure from USL to find a suitable long-term home for the club. If they are truly returning in 2017, the owners and the remaining staff must be working furiously to accomplish their goal. Their only public step so far is the nice-looking Stadium for Austin website (and accompanying Facebook page), starting to make the case for why Austin needs a “major league” venue for soccer.

Why the club is feeling urgent pressure from the league for a new stadium in 2016 leaves some supporters scratching their heads. The league was well aware of the stadium challenges we have in Austin, and though the Aztex were an expansion team on the professional side this year, they were not new to the USL. For the previous three seasons, the club competed in the USL-PDL at House Park. Representatives from the league have even come to Austin and attended Aztex matches there in person.

The damage caused at House Park by epic Memorial Day floods has been repaired, and that stadium has been hosting AISD events for more than a month. While it made sense for the Aztex to finish their season at Kelly Reeves, we were told by a club official that House Park and AISD would welcome the Aztex back in 2016. What is not clear, is why the Austin ownership group and/or USL no longer considers House Park suitable.

In May the USL announced a partnership with stadium architects HOK, with USL President Jake Edwards stating in the press release, “A critical part of our strategic growth plan is to have all USL clubs as owners or primary tenants of soccer specific stadiums by 2020.”

2020 sounds great; any player, supporter, or blogger would love to see a thriving lower division of soccer in the US, with stable teams instead of the revolving door we’ve seen historically. It’s an ambitious goal – in 2015, MLS doesn’t even meet this standard – but it is hard to get better without setting aspirational goals and developing strategic growth plans.

Fast-forward three months and suddenly everything about Austin’s stadium standard seemed to change. There was no longer a 5-year plan, instead there was a 12-month deadline for the Aztex to find another venue. In an August 21 Austin American-Statesman article, the Aztex ownership stated that they thought they had a little more wiggle room. But USL senior vice president of marketing and branding Tom Veit declared, “We would like Austin to have a new facility for 2016.”

With league standards requiring teams to have a signed lease at a venue at least 120 days prior to the start of the season, that left the Aztex with four months to accomplish what had sounded like a much longer-term goal. While the Aztex are the only team operating in a high school football facility, they are not the only one playing in a venue that fails to meet Jake Edwards’ USL growth plan, and by no means are they the only team that isn’t the owner or primary tenant of their home venue.

So what are the USSF standards? Since former USL President Tim Holt made public that the league is striving for Division 2 status, let’s take a look at what USSF requires of clubs at that level.

If you are new to the discussion, there really isn’t much difference between D2 and D3 from the casual fan’s viewpoint. On the pitch there is even less separation, as the lower level USL dominated NASL in US Open Cup play in 2015. However, when you take a look at stadium standards, there is one difference.

Teams operating at the D3 level are required to have seating for 1,000 or more. At the D2 level, the standard increases to require a venue with seating of no less than 5,000. That’s all that’s specified: a 5,000 seat stadium, a pitch, and nothing else. House Park meets that requirement, as does Kelly Reeves, as do a dozen or more other potential venues in the Austin metro area.

We reached out to a USL representative on Twitter to see if they have published their stadium standards; the answer is no. There is nothing publicly available from USL outlining their stadium standards. There is nothing, officially, about football lines, or goal posts. Nothing about being able to sell beer or alcohol. Nothing about needing to own or control your venue.

Another article from August, focusing on the Harrisburg City Islanders’ stadium situation and published close to the time Veit was commenting on the Aztex, lists Austin as one of the teams that meet the 5,000-seat requirement. In fact, Austin was one of only 13 clubs to already meet the standard in 2015, leaving 11 other USL clubs in some potential trouble.

However, Austin is the only USL team that has announced they won’t be competing in 2016. And the reason given for this extraordinary decision is that there’s no suitable stadium. There isn’t a soccer supporter in Austin that wouldn’t love to see our team in a brand new soccer stadium, but is that truly a requirement to compete at the USL’s current D3 level, let alone the anticipated D2 level?

The answer is plain and simple. House Park — the established downtown home of soccer in Austin for more than three years — meets the standard, as do many other stadiums throughout the capital city. Yet the league and the team ownership evidently think that it would be better to have no professional soccer in Austin in 2016 at all, than to play on a high school football field.

Update: After completion of this post but prior to publication, the Aztex announced that Circuit of the Americas (COTA) will be hosting a watch event for Saturday’s Concacaf Cup clash between the USMNT and Mexico. We cannot help but wonder if this is a smoke signal that a stadium for Austin will likely be constructed on COTA grounds.

Comments from 2012 prove that building a soccer stadium at COTA is not a new idea. The F1 spectacle is only one week per year, and the venue is obviously looking for more than the big race to fill their calendar. While we have no inside knowledge of plans, it has been previously stated that the Grand Plaza is big enough for a soccer field with seating for 15,000-18,000.