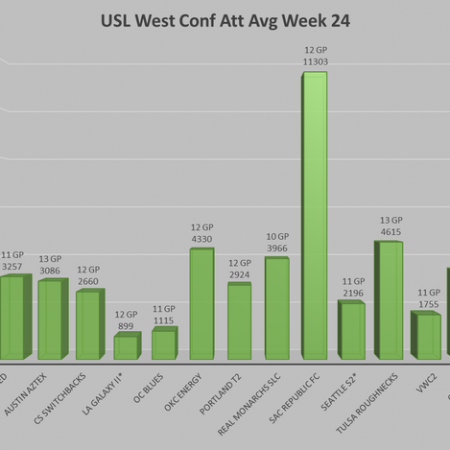 The most diligent keeper of attendance stats in American soccer over the years has to be Kenn Tomasch. With the 2015 USL regular season just completed, he has a new post with all the numbers: Taking Attendance 10/4/2015: USL First Division III League To Draw A Million.

There are lots of interesting facets to check out there, but here are the more Austin-specific bits.

The Aztex averaged 3,227, putting them 11th out of 24 teams. That’s solidly middle-of-the-pack, whether or not the outliers at the top and bottom are included. In his commentary on the numbers, he points out Austin’s increase over last year:

As well as the recent news about the 2016 hiatus:

Austin’s performance was followed shortly after season’s end by the news that they will sit out the 2016 season to shore up their stadium situation [footnote: and/or figure out how to sell beer wherever they play]. Before you ask, yes, a handful of clubs have taken a year off and come back, and if this were not the New Era of American Soccer, I’d be skeptical they would. Complicating things are USL’s plans/aspirations of applying for Division II status for the 2017 season. Austin would have to make some major gains to be DII-compliant.

His conclusion points out the uncertainty surrounding USL’s future in two years’ time:

But, as mentioned above, the really interesting time for USL will be 2017, and we’ll have a peek at that later this year (supposedly). USL had originally announced its intention to apply for DII status for 2017 in late 2015, but with the recent kerfuffle over proposed changes to DII standards – and the fact that it would be simply unrealistic for all of USL’s current clubs to be DII-compliant – we’ll see if they stick to that.