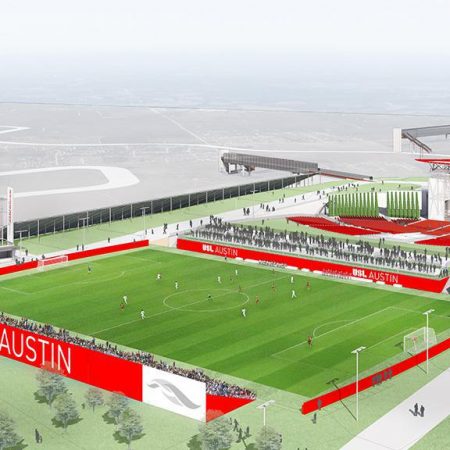 [Editor’s note: it’s been a while since we’ve had much going on here on the Violet Crown Soccer Network. With confirmed news of a real-life pro team returning (eventually), we’re coming out of hibernation. First up: the following post by Lee Nichols, a rabid Austin soccer fan and former Aztex season ticket holder. If you’re interested in contributing, let us know!

By now, every soccer fan in Austin has surely seen the announcement that the United Soccer League (USL) is returning to town, with a stadium to be built at Circuit of the Americas (COTA).

And predictably, whining about the location began across the internet within seconds. According to the doomsayers, COTA is right next to the gates of Hell, and Austin soccer is going to get sucked down into it.

I’ve been debating with these Debbie Downers in various places across Facebook, and I’d like to consolidate these arguments into a single place, so thanks to Violet Crown Soccer for the forum.

I don’t claim to be an expert on sports business, and there’s nothing scientific about my analysis – it’s all anecdotal, and I welcome debate.

Let’s take a look at some of the many complaints/claims I’ve seen:

“This location will doom our chances at obtaining an MLS franchise”

This location has little or nothing to do with the location of a future MLS stadium. Building at COTA is a solution for the immediate problem at hand: That we do not have an active pro team of any sort or a place for it to play. If MLS happens, that stadium will be located wherever investors decide it will work. COTA will be hosting our USL stadium.

“COTA is hell & gone From downtown”

No, it’s really not – only 14 miles. That’s half as far from downtown as the Dell Diamond, the stadium of the quite successful Round Rock Express minor league baseball team. And this will actually be more accessible for the whole region than Dell – fans in northern suburbs can easily come in on SH 130, and Eberly’s Army President Matthew Gray and his Buda neighbors from SH 45. For us central-city dwellers, is this really much more than a run to the airport? For the small minority of fans who aren’t car owners, solutions can be found.

Some other comparisons with which I’m personally familiar: Sporting Kansas City’s stadium is 16 miles from downtown KC; San Antonio FC’s Toyota Field is 13 from downtown SA. (More on these examples in the next section.)

“A downtown stadium is essential to success”

Yes, I know, MLS has stated a preference going forward for downtown stadiums. That doesn’t mean they’re going to say “no” to a strong ownership group with a solid plan.

But again, we’re talking about the USL stadium, not the future stadium of our as-yet completely nonexistent MLS team. And a downtown stadium could be financially ruinous for a USL team. Even if a USL team drew strong crowds, they might still not be big enough to offset the exorbitant cost of downtown land in Austin’s insane real estate market.

But let’s look at this notion that downtown is the only path to success:

Back to my Sporting Kansas City comparison. Children’s Mercy Park is in a location that bears a strong resemblance to COTA: Out in the boonies, about the same distance from downtown, and coincidentally next to a racetrack (Kansas Speedway, a major NASCAR venue). Children’s Mercy is consistently full.

Now compare that to the Houston Dynamo’s BBVA Compass Stadium, right in the heart of the city, supposedly the magic spot. Go to a Dynamo game, or watch one on TV, and you’ll see acres of empty orange seats. It’s embarrassing. In fact, there’s a Twitter feed named “Empty Seats Galore,” which ridicules poorly attended sports events, and Dynamo games are featured regularly. (Yes, I know the Dynamo claims fairly high attendance, but simple visual inspection shows that tickets sold or distributed isn’t the same thing as butts in the seats.)

Some cite FC Dallas as an example of suburban failure. I don’t think FCD is comparable to COTA – way out in Frisco, it really is hell and gone from everything, double the distance from downtown as COTA. It’s like if we put USL Austin in north Georgetown.

More directly relevant to COTA is San Antonio FC’s Toyota Field – about the same distance from downtown, and hosting a USL team. I’ll concede this example is a mixed bag: I’ve been to some poorly attended games here, but also some very well attended ones. In either case, I can tell you I’ve had a fun fan experience there. Which brings us to the next complaint …

“Nothing to do out there/poor fan experience”

This is a fair point. But not an insurmountable obstacle.

One critic of the location wrote on Facebook, “Fan experience is NOT created on a shuttle bus, or sitting in a parking lot waiting to get into a sterile stadium in a cornfield.”

Frankly, I’ll be surprised if this turns out to be a “sterile stadium,” but let’s talk about parking lots (again, anecdotally, but fan experience is inherently subjective): The tailgating for lots of America’s sports happens in parking lots. I’ve been to multiple sporting events in Kansas City (my in-laws live there), and I gotta say, the parking lot tailgate has always been fun, whether it’s Sporting, the Chiefs, or the Royals. In fact, the Chiefs’ tailgate scene is often cited as best in the NFL. Closer to home, the same can be said of San Antonio FC’s tailgate, underneath a bridge outside the stadium in an old quarry – lots of fun.

Sure, I’d prefer the old days of walking from the Tavern to House Park. And COTA might have an answer for that – it aims to be an entertainment destination well beyond its annual F1 race. It’s already getting good reviews as a concert venue. It contains a bar, and would seem to have potential for restaurants, or at least food trucks.

“Fan experience” is creatable. And really, it’s not up to bars and restaurants to create it – we can do that ourselves. Of all the concerns raised, this is the one most under our control – we’ll get out of it what we put into it.

I can’t say for sure – again, I’m no businessman – but I think the real key to the success of USL Austin will have little to do with stadium location. It will be about marketing. Epstein and company need to go all-out to make sure Austin knows his team exists, that families and rabid soccer fans alike are welcome, and that Austin has a serious pro sports franchise.

The Express offer a great model to follow – despite being minor league, no one doubts they are watching pro sports. By contrast, one guest of mine at an Aztex House Park game seriously asked me at halftime, “Wait a minute … this is a pro team?”

If any location was doomed to failure, it was the downtown House Park. Heck, crowds increased slightly at Kelly Reeves out in the strip-mall desert of Williamson County.

I also can’t guarantee that COTA will be a success. But I can say, because solid comparable examples exist, that success at COTA is possible. Now it’s up to Epstein. And us.