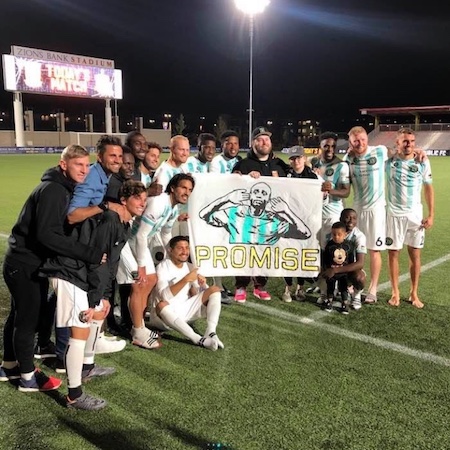 It was a bad night for the reputation of Bulgarian fans, as their racist abuse of England’s black players nearly caused their European qualifying match to be abandoned. That the Bulgaria team leadership are turning a blind eye to it, makes it all the worse:

The statement from Bulgaria’s manager, Krasimir Balakov, that he had not noticed anything, that he just wanted to talk about football, was an anatomy of cowardly dissembling. Balakov had a responsibility to his sport and to basic human decency. He failed on both counts.

Ibra led this year’s MLS jersey sales, but the other thing I noticed about this list of the top 25 most-bought player jerseys was the number from Texas MLS teams. (Spoiler alert: the number is zero.) That neither Dallas nor Houston pour money into splashy, celebrity player signings isn’t news, but it makes me wonder if that’s all the more reason for Austin FC to go the other way… /cc: Chicharito

The Longhorns won last night in Waco, beating Baylor 2-1. The win gives them 12 points, putting them in second place in the Big 12 regular-season standings, one point behind first-place Oklahoma State. UT will host Iowa State here in Austin on Thursday, 10/24 at 7PM (tickets are just $5).

The Bold clinched their playoff spot with a 2-2 draw with Real Monarchs, with goals from Ema Twumasi and Andre Lima. Austin’s USL Championship team will finish their inaugural regular season on the rooad against Tacoma Defiance tonight (10/19 at 9:00 PM on ESPN+).

Only one player tifo up tonight. Much love to the @AustinBoldFC family. pic.twitter.com/zoGzhmfC70

The sole Texas MLS team to make the 2019 playoffs will start their postseason campaign looking to upset the Seattle Sounders today (10/19 at 2:30PM on FS1).

Oh, the USMNT. After their 7-0 destruction of Cuba, veteran player Michael Bradley had this to say about the new CONCACAF Nations League:

“Not a huge fan, at all,” said the experienced midfielder, who did not play in the one-sided affair. “You want to play on as many days as possible against the best teams, against the biggest teams, and the reality is for us, playing games in Concacaf, they don’t do enough to prepare us for the types of games that you see at a World Cup.

Then his team went to Toronto and got shut out by Canada, losing 2-0 to a team that hasn’t beat the US for 34 years. Nailed it, Mikey.

The European leagus are back in action this weekend, and the UEFA Champions League group stage continues this coming Tuesday and Wednesday, Oct. 22 and 23. Look for games on TNT, B/R Live, Galavision, or whatever “fuboTV” is (find details on Live Soccer TV (see below)).

Live Soccer TV, both the website and the app (available for Apple or Google Play devices). It’s surprisingly complete, rarely wrong, and I wouldn’t bother carrying a phone without it.