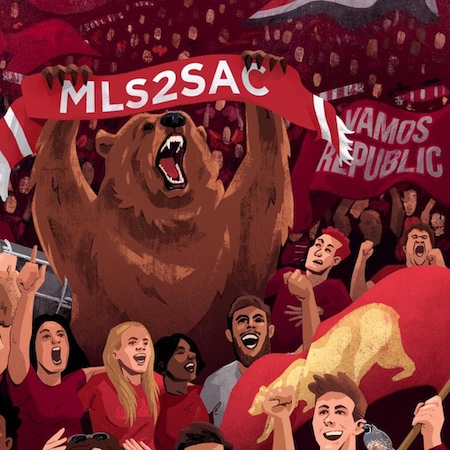 The MLS team on the other end of US 290 has a new coach: Tab Ramos is taking over in Houston:

Ramos, 53, joins the Dynamo after serving as the head coach of the United States Under-20 National Team since 2011 and as the U.S. Soccer Youth Technical Director since 2013. During that time, he led the U-20s to the FIFA U-20 World Cup in 2013, 2015, 2017 and 2019 and three consecutive quarterfinal appearances. He was also Assistant Coach to Jurgen Klinsmann including the 2014 FIFA World Cup in Brazil where the U.S. team advanced to the Round of 16.

And MLS itself has new team: Sacramento Republic FC got the nod:

California’s capital city has been awarded an MLS expansion team with Sacramento Republic FC becoming the league’s 29th team and beginning play in MLS in 2022. The club will build a new, $300 million, 20,100-seat soccer stadium in the downtown Railyards District.

Megan Rapinoe, the best female player of 2019, came to town to speak at the Texas Women’s Conference:

“The idea that being paid equally, knowing what you deserve, and being grateful are mutually exclusive – that doesn’t compute for me or anyone on the team.”

@mPinoe when asked about working successfully with her ⚽️ team. “Mutual respect, admiration and care are the most important. You don’t have to be someone’s best friends to care about them.” #TXConfWomen @TexasWomen pic.twitter.com/SFR1r7C94I

Nobody Seems To Support Austin’s Proposition A, But We Still Have To Vote On It – what a colossal waste of time, energy, money, and good will.

Proposition A, one of two city propositions before Austin voters, began as a way to stop the building of the new Major League Soccer stadium currently under construction in North Austin. The fight to get it on the ballot began last year with the financial backing of one soccer team owner, Bobby Epstein, hoping to stop another soccer team owner, Anthony Precourt, from moving into the city.

Some interesting stats on USL attendance (click here for the full-sized infographic):

FINAL 2019 #USL Reported Attendance: Quite a few season highs in finales; 12 teams experienced increases vs. 2018; independently owned teams averaged 5,467 – down about 9.9% with Cincy's departure (but buoyed by strong new teams); USLC finishes at 2.7M for the season #SportsBiz pic.twitter.com/vERvTZ6nBv

The Longhorns won again, beating Iowa State 3-2. Their last home game of the season is Sunday at 1PM, when they play Texas Tech (tickets are just $5)

The Bold won their play-in playoff game, beating LA Galaxy II 2-0 at COTA. Next up, they’ll go to Arizona and face Phoenix Rising in the quarterfinals:

After a 2-0 win against LA Galaxy II, The Bold advance to the next round of the USL Championship Playoffs to take on Phoenix Rising FC at Casino Arizona Field. Phoenix is the team to beat in 2019, breaking the USL Championship record of consecutive wins with 20. The Bold can take confidence in the fact they were one of the four teams capable of beating Rising FC this season.

We don’t usually track USL-1, but FC Dallas’ brand team, North Texas SC, won the league, in both points and playoffs. They don’t spend much money in Frisco, but thety’ve built a truly formidable youth system.

Speaking of FC Dallas, they got knocked out of the MLS playoffs, losing 4-3 in extra time to Seattle. Their season is over, but in rebuilding year under one of the youngest coaches in the league, getting to the playoffs at all, and putting up a tough fight in a venue where they’ve struggled historically, wasn’t a terrible place to end the season.

The MLS playoffs continue this week. The western conference semifinal, LAFC v Seattle, will be on Tuesday (10/29 at 9PM on ESPN), while the eastern semi, Toronto v Atlanta, happens on Wednesday (10/30 at 7PM on FS1). The MLS Cup final follows the next weekend, Sunday, 11/10 at 2PM on ABC.

The top-tier US women’s league will hold their championship match tomorrow, as the dominant North Carolina Courage host first-timers Chicago Red Stars (10/27 at 2:30PM on ESPN)

NBC Sports – who are hosting their Premier League Mornings Live at Scholz Garten this weekend. Gone are the days of their broadcasting every EPL game without buying an additional subscription, but their coverage continues to set the standard. And that they chose our little Texas town for this event is pretty cool. Who knows who paid who, and how much, but let’s just take it as another indicator of – and boost to – the buzz our sport has around these parts. We’ll be at the fan fest today and tomorrow, say hi if you see us.