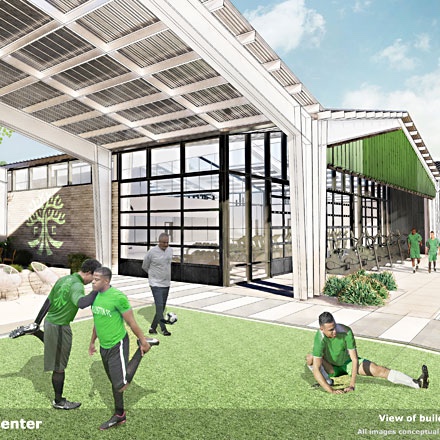 The center, home to Austin FC and its academy teams, will encompass four full-size soccer fields along with 30,000 square feet where players, coaches and other soccer operations staff will work, train, eat, watch film, recover and receive medical care. It is scheduled to be completed in time for the team’s first regular-season MLS match in the spring of 2021.

The facility may also be used as a park-and-ride shuttle stop for gamedays:

Karlin Real Estate, a partner on the project, owns the 300-acre business park where the performance center will be located, with parking lots that are mostly empty on nights and weekends located less than 5 miles from the stadium site. A shuttle system could significantly ease stress around the Domain area, where approximately 835 onsite parking spaces are planned at the stadium.

Speaking of soccer developments north of town, the Round Rock Multipurpose Complex has won hosting rights for the Big 12 NCAA Championships in 2020-22. The Statesman has more on the story:

Circuit of the Americas also put in a bid to host the tournament at Bold Stadium, the 5,000-seat home of USL Championship franchise Austin Bold FC, but a COTA representative said the potential for overlap with the Formula One U.S. Grand Prix meant it could not guarantee specific dates for all three years in advance.

Austin FC also has interest in hosting future Big 12 Soccer Championships at its 20,500-seat stadium, which will open in 2021, a club official confirmed. But there was no official bid made this time.

Meanwhile, in the 2019 Big 12 Championship, the Longhorns’ season ends in NCAA First Round loss at A&M:

They had to work for it in a tightly-contested rematch with Toronto FC – their third championship meeting in four years – but the Sounders took the rubber match 3-1 thanks to a 57th-minute winner from unlikely hero Kelvin Leerdam and beautiful insurance goals from Victor Rodriguez and Raul Ruidiaz. Jozy Altidore added a consolation goal for Toronto in stoppage time.

Now it’s on to a busy offseason, with expansion teams Nashville SC and Inter Miami CF preparing to join next year.

The women’s team wrapped up a very successful 2019 with a 6-0 win over Costa Rica in Jacksonville.

Greg Berhalter and the men’s team took some heat off by beating Canada 4-1 in their CONCACAF Nations League match in Orlando.

The Promise Isaac GoFundMe, which has almost reached its goal. Pitch in to help it over the finish line.

The funds will help the family with the funeral rites since he’ll be buried in his hometown in the Imo State of Nigeria and also to help his young wife and children to start a new chapter in their lives without their father, husband, and primary provider.