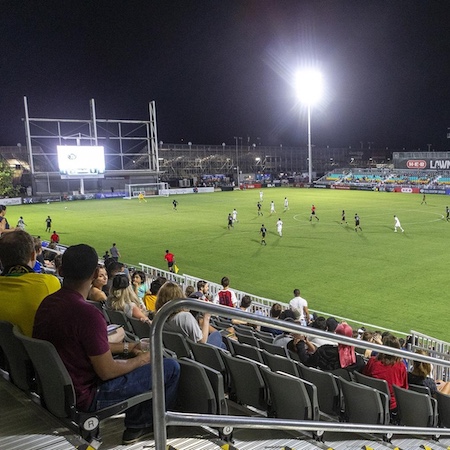 Yet it was a midweek playoff match, scheduled only a few days in advance, that showed interest may be on the upswing for 2020. The 5,036-seat venue was by no means full for the Bold’s 2-0 win over LA Galaxy II on Oct. 23, but the announced crowd of 2,656 felt every bit of a top-five turnout for the year, close to the 3,004 announced for the regular-season home finale against Las Vegas.

More importantly, there was a group led by supporters group LaCinco12 that sang for the full 90 minutes against LA Galaxy II, and many people stayed afterward to celebrate on the field, creating a buzz among players, fans and the front office.

also noted in that article:

Season ticket sales underway: Austin FC has begun the process of selling premium season ticket memberships, with the experience center at the team’s office booked for the foreseeable future. Team officials expect premium sales to continue for the next few months until moving on to fans who placed general and supporters section deposits.

The schedule and locations for USWNT Olympic qualifying were announced. The tournament will be held in late January and early February, and includes two Texas sites:

BBVA Compass Stadium in Houston and H-E-B Park in Edinburg, Texas will host the group stage matches before Dignity Health Sports Park in Carson, Cali. will host the semifinals and final.

Forbes’ list of Most Valuable MLS Teams is out:

League investors in Cincinnati and Nashville agreed to pay $150 million to join up while planned teams in St. Louis and Sacramento will come on at an expansion fee of $200 million. The next round, for MLS team No. 30, is expected to sell for more than $300 million. That’s triple what NYCFC and Orlando paid less than five years ago, and it’s a staggering 650% increase over the $40 million that the Montreal Impact’s owners paid to join the league in 2012.

The Longhorns had a hard-fought match with TCU in the Big 12 quarterfinal last Sunday, but lost the penalty shootout after a scoreless game and two overtimes. “The Longhorns now await word of their NCAA Tournament fate with the broadcast of the NCAA Women’s Soccer Championship Selection Show on Mon., Nov. 11.”

The MLS Cup final is Sunday, seeing the Seattle Sounders face Toronto FC yet again, though this time it’s in Seattle. The nearly 70,000 tickets were reportedly sold out in a staggering 20 minutes.

There are a couple of watch parties in Austin if you (1) couldn’t get a ticket to Century Link and (2) don’t want to watch from alone on your couch. Austin Soccer Foundation is hosting one at Haymaker, and Austin FC is hosting one at The Brass Tap.

Wherever you watch, the game starts at 2PM, and will be broadcast on ABC(!) and Univision.

The USWNT beat rival Sweden 3-2 in a friendly, getting new head coach Vlatko Andonovski’s tenure off to a strong start.

The US Men resume Nations League play this week, taking on Canada in Orlando next Friday (6:00PM on ESPN2).

MLS not being on the same calendar as the rest of the world. I know, I know, it’s a bummer and makes transfer windows weird and somehow proves that our pro league is lesser (spoiler: the people who think the US league is lesser will always come up with something that proves it). But one shout-out-worthy advantage is that it gives us year-round soccer, with no offseason ever, year after glorious year. After the MLS Cup final tomorrow, there’s another international break, then back to Bundesliga on FS1 and EPL on NBCSports and Serie A on ESPN+ and La Liga on beIN.