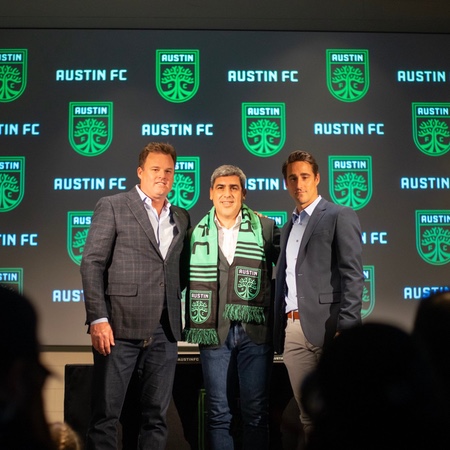 The big news this past week was Claudio Reyna’s arrival as Austin FC’s first sporting director, announced at a press conference on Tuesday:

In the Q&A session with fans, Reyna hinted that Designated Players coming to Austin might not be of the David Villa, Frank Lampard, and Andrea Pirlo variety that marked NYCFC’s debut season.

“New York is a very cluttered market with so many teams and just so much going on, that we decided … it was important to bring in big names to make a splash, to see if we could cut through the clutter.”

(You can watch the full event video here.)

The Statesman has more coverage on the new hiring:

Reyna will begin by spending two weeks a month in Austin while also traveling for scouting and other duties. He said the plan is for his family to remain in New York until July as his two youngest children finish up school and sports seasons. For the new Austin FC sporting director, class is already in session.

“It’s sort of like the first day of school at a new school,” Reyna said. “I’m very, very excited. Can’t wait to really get going and get to know people and the city of Austin, which has been amazing so far for us to visit.”

As Austin FC’s season-ticket deposit list is (slowly) starting to be worked through, this comparison of season ticket prices across the league was interesting.

The final attendance numbers for the 2019 USL Championship have been tallied:

The saving grace for USL was a group of well-drawing expansion teams, including New Mexico United, which turned in the highest average by a Division II team ever that wasn’t based in Cincinnati or Montreal.

Unfortunately Austin Bold FC, Austin’s own local expansion team, are 26th on that list of 36, so they weren’t pulling the averages up. Room for growth in 2020.

Over the summer, Anthem hosted watch parties for the Women’s World Cup, including one for the final match that absolutely packed Easy Tiger at The Linc. With the Latin-inspired horns and drums of the Zanate Musical Collective, also known as La Murga, leading the way, Anthem marched in the Pride parade and the Dia de los Muertos parade and has been on the sidelines at almost every home UT women’s soccer match this season.

European leagues continue full speed ahead, and Champions League play returns this coming week, too. The group stage will conclude Tuesday and Wednesday, Dec. 10 &11, with plenty of spots in the knockout round still in play. Games are on Galavision, TUDN, or B/R Live each day at 11:55AM and 2PM.

The Athletic (that’s a referral link), a subscription-only sports news website. In these days of increasingly annoying (and increasingly privacy-invading) ads, some sites are trying out the old pay-directly-for-what-you-want model. It’s a little bit of a drag that we can’t link to Athletic stories here, because they’re behind a paywall, but they do excellent work, with lots of first-class soccer coverage, and tons of content on other sports. If you do follow that link, and subscribe, you’ll save some money and I’ll get Amazon credit or something. They offer a free trial, so you can check it out without spending a penny. We’re supporters, right? Support sports journalism.