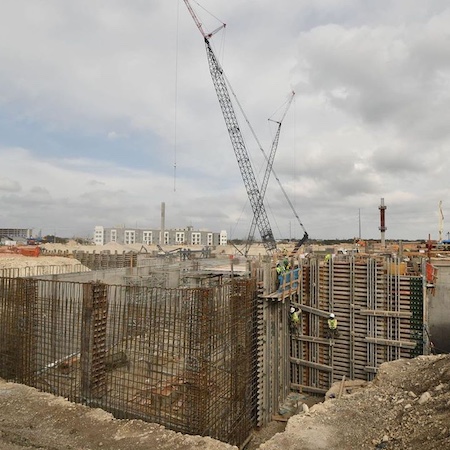 We are still a year away from watching our city’s first major league team take the pitch, yet Austin FC has already charted an ambitious start. For those of you that have followed sports in Austin over the last few decades, you know that securing a stadium has been the largest hurdle for any professional sports organization searching for sustainable success.

Austin FC has not only secured a stadium site, and inside Austin’s city limits at that, they have broken ground and the concrete is flowing. The stadium at McKalla Place, bordered on one side by Burnet Rd and located close to the Domain, has plenty of brewery and entertainment options nearby. Naming rights are certain to be in the news soon. We won’t speculate too much here but expect a big name and a big price tag to go with it. If you want tickets to watch it live and in person, be ready to spend. Currently, premium tickets are starting at $300 per match, though more reasonable tickets will be on sale soon to those who got on the record-breaking deposit list. We don’t expect FC Dallas or Houston Dynamo prices; the excitement Austin has shown for this new team suggests a different level. And make no mistake, the fans paying those higher prices will expect a winner from the start, and deservedly so.

Grant Wahl started his ambition rankings for MLS clubs back in 2011. If you take the time to look back, you’ll see a much different era of MLS. Both FC Dallas and the Columbus Crew had the same ownership group. Neither club was given a favorable ranking back then, but wow, have things changed. Not necessarily with the ambition of FC Dallas, although they are leaders at developing talent on the field, championship status has not been there.

Houston Dynamo were also part of a multi-team ownership structure and were set to open their new ground in 2012 in the urban core setting that the league has emphasized so much over the years. However, after eight seasons at BBVA, the stands are rarely full, and the silverware earned under Dominic Kinnear has yet to be matched.

The future of Texas professional soccer and the potential for a “Come and Take It Cup” will play out in a stronger and more mature league, deserving of recent investments in the sport domestically. Current expansion clubs are paying in excess of $300 million for the privilege to field a team, a staggering increase over the last ten years.

Here locally, Austin FC seems to be checking all the boxes for future success. They’ve announced development of a new training ground to be constructed a short drive from the stadium, a site large enough to host the senior team as well as the youth academy squads to develop home grown talent.

Have we mentioned the hires? The top two positions have been filled by USMNT veterans with a global pedigree in addition to MLS experience and success. Both Claudio Reyna and Josh Wolff have locals excited about what we can expect from this organization tactically and developmentally.

Austin FC has also been working well with the local community. Their deal with the city outlines several requirements to assist with funding affordable housing. Their commitment to our city hasn’t stopped there. They have shown a friendliness to local non-profits and partnered on initiatives with Austin Soccer Foundation, Upper Ninety and Soccer Assist, to name a few.

A little over a month away from the last MLS season without an Austin team, fans around town have been full of suggestions for talent. Local supporters like Austin Anthem have been loud and clear about their hopes for some marquee international talent on the roster. The LA Galaxy just snatched up Chicharito, and Beckham’s Inter Miami is rumored to be after David Silva and Sergio Agüero, but there are plenty of stars left that could consider an Austin move. How long is Gio Reyna under contract in Dortmund, anyway?