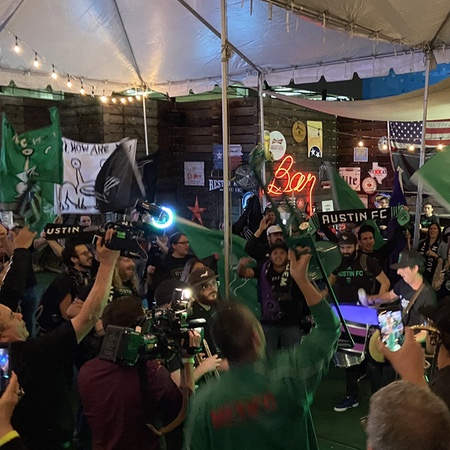 The Statesman’s Chris Bils kicks off our first update of the new year with Bold 2020 news:

Mark your calendars. Austin Bold will begin its 2020 season at home, with the opener against New Mexico United set for 7:30 p.m. March 7 at Bold Stadium.

The Bold will also have a new weapon in year two, with longtime Austin rival Billy Forbes joining up to add depth along the front line. The 29-year-old forward from Turks and Caicos is the team’s first signing of the season, joining 11 returning players from the 2019 campaign.

Forbes played for San Antonio FC last year and had a goal and assist against the Bold when the teams played at Toyota Field. It was his third stint in San Antonio, making Forbes a familiar name for Austin soccer fans going back to his days with the Scorpions facing the Austin Aztex.

It’s still a year before Austin FC take the field in MLS, but it’s also a year since their official MLS announcement, and they celebrated it:

Official word should be out soon about what Austin FC tickets will cost, but that’s not stopping speculation. Capital City Soccer charted a comparison of the other Austin sports’ season ticket prices, concluding that “Austin sports fans spend about $1,000 per seat on season tickets.”

Bils adds (from the same article linked above):

Looking for clues? The club seats are more in line with those at Los Angeles FC’s Banc of California Stadium than anything you’ll find at FC Dallas or the Houston Dynamo. Expect prices to be high. “There is no current comparison in MLS in Texas,” Austin FC president Andy Loughnane said.

And news of our coming MLS team is spreading, even making it so far as the esteemed (not) Daily Mail:

The city’s first professional sports league team, a state-of-the-art stadium and Hollywood actor Matthew McConaughey is a part owner… meet Austin FC, a side ready to rival the A-list appeal of David Beckham’s Inter Miami when they join MLS

Sources tell me that this will be last year of Dynamo/RGV in Valley with @USLChampionship . They will enter team in the future in @USLLeagueOne in Houston. This is a statement in the name of player developement by Dynamo . So much to be gained organically, monitor players etc.

The USWNT are coming to Texas a couple times in the next few months.

First up is Olympic qualifying, with the CONCACAF tournament taking place in Houston at BBVA Stadium, and Edinburg at HEB Park, Jan. 28 – Feb. 4. Group A (USA, Costa Rica, Panama, and Haiti) will be in Houston, while Group B (Canada, Mexico, Jamaica, and St. Kitts & Nevis) will be in Edinburg.

In March you’ll have another chance to see high-level international games as the fifth annual SheBelieves Cup arrives in Frisco. The FC Dallas home field will host an intriguing double-header on March 11: England (#6 FIFA rank) vs. Spain (#13) at 4:15, and USA (#1) vs. Japan (#10) at 7:00. Book your spring break tickets to North Dallas today!

P.S. to Dallas and Houston: enjoy these winter national team games while you get them, there’s going to be a shiny new stadium competing for those right here in Austin before you know it!

The 2020s – Not just a new year, but a new decade, nay, a new era in the sport we love. With the Bold already here, and Austin FC fully arriving soon, it promises to be an amazing time in Central Texas. Beyond that, the ongoing stability of the pro sport across the country, the growth of the women’s game at both the league and international level, the expanding ability to watch games from anywhere in the world, it’s bound to be exciting. And just imagine if the US Men manage to get their sh*t together, too!